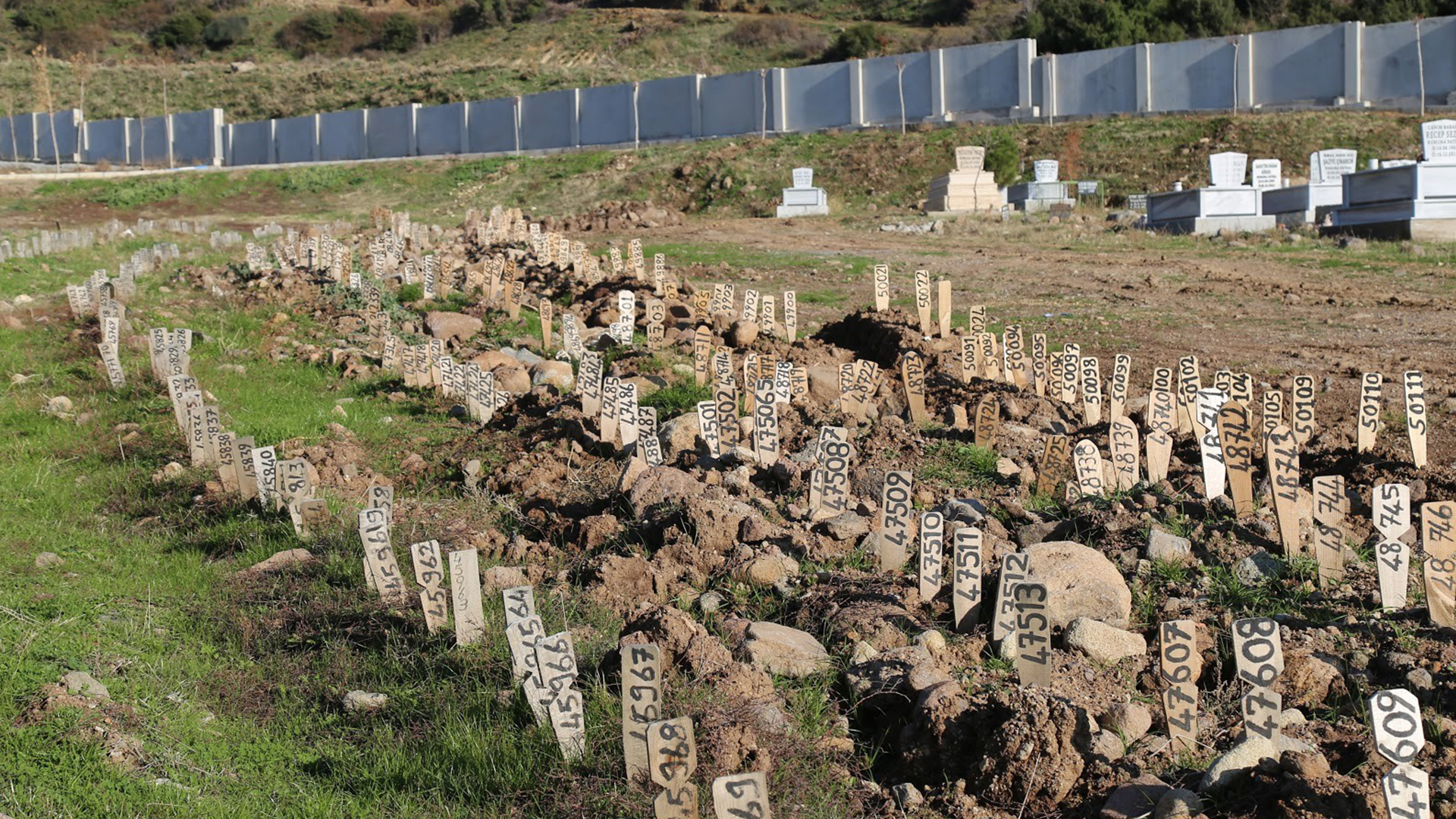 A man's quest to find his missing family takes him through a grim tour of Turkey's coastal morgues.
By Sharon Nadeem & Andrew Seal/UBC
Additional Reporting by Fattah Lemar Rabiei/UBC


A small sign with five handwritten numbers marks each grave. One is 47609, the next, 40607. Six rows of signs in one spot. There are dozens more beyond this road that cuts through the nameless section of the Doguncay cemetery in Izmir.

Between the buildings in the distance, the graves have a faint view of the Mediterranean. It looks gentle at a glance, but it's in these formidable waters that most who ended up here drew their last breaths. Finding unidentified bodies is a new normal in Turkey's coastal cities. The people buried in Doguncay cemetery represent a fraction of the desperate and unidentified asylum seekers and migrants who died seeking a better life.

Mujtaba Haidar never got to bury his family. Three years ago, he boarded a boat to Greece with his wife, Shila, and their three kids: Zahra, 8, Beham, 7, and Behzad, 3. When the vessel capsized soon after leaving the Turkish coast, Mujtaba and his oldest son were rescued, but the rest of the family were never found.

His search for them — and the still unfulfilled results — fuels his belief that somehow, somewhere maybe they're still alive.

Last year alone, 3,000 migrants drowned or disappeared trying to make the dangerous journey across the Mediterranean. Poverty and violence in war-torn countries like Syria, Afghanistan, Somalia and Libya, drive thousands to attempt the illegal crossing every year, usually in nothing more than an overcrowded inflatable raft. For most, it is their last desperate attempt at a future. But the cold, rough waters of the Mediterranean have claimed the lives of 15,500 people since 2014, according to statistics from the International Organization for Migration (IOM). 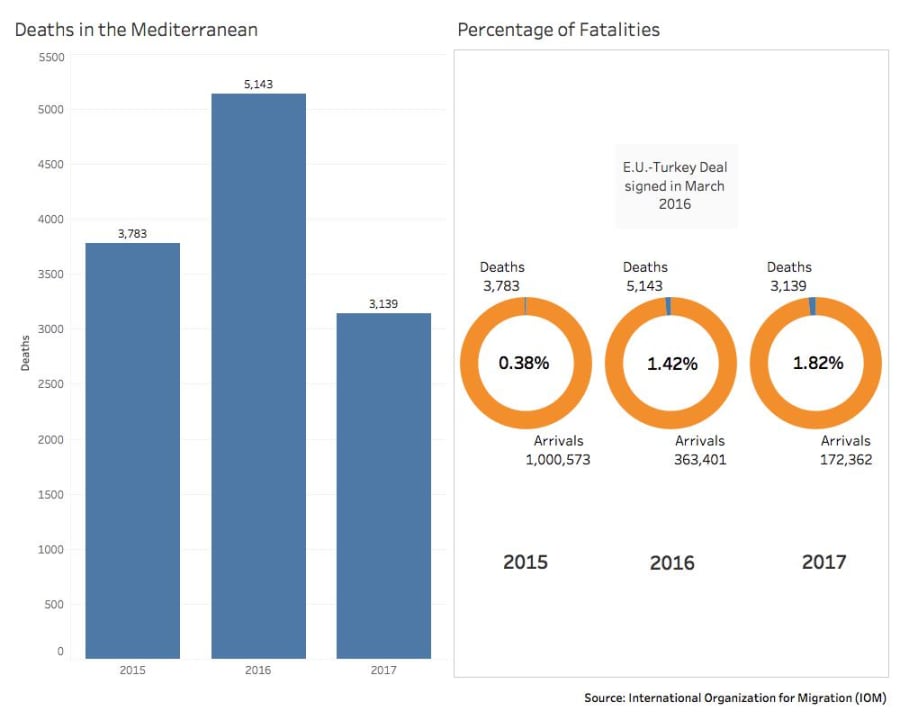 When bodies wash ashore in Turkey or are pulled from the sea, they are taken to the local morgue where coroners snap a photo, record physical specifications and collect a DNA sample. If nobody claims the body in 15 days, it's buried under a number. The DNA, along with the other information, is kept for five years, in the hope that one day, families will come looking for their loved ones. But when Haidar went to the morgue in Istanbul, and tried to give blood to trace his family, he was refused. Instead, he was shown hundreds of pictures of dead bodies and asked to identify Shila and his kids. If he can find one that resembles them, they will take his DNA.

"None of them matched my family," says Haidar.

Frustrated and confused, he sought answers at United Rescues, a non-governmental organization (NGO) specializing in search and rescue, where he met Stella Chiarelli. An architect-turned-refugee volunteer and the NGO's director, she’s seen hundreds of cases of families lost at sea. The growing numbers forced United Rescues to start a missing persons unit. She wasn’t surprised to hear that Mujtaba couldn't recognize any of the pictures.

"Many bodies arrive [at the morgue] in a condition that you cannot recognize,” says Chiarelli, explaining that bodies get bloated in water or experience some form of disfigurement. In such cases, DNA is the only alternative, she says, but none of the missing persons cases registered with her organization were able to use it. In her experience, morgues refuse to accept DNA of family members unless they have a court order. Chiarelli and Haidar made their way to the Ministry of Justice, taking seven-year-old Behram with them. They had hoped to explain Haidar's case and obtain a court order, but arrived at a dead end.

"They told us we needed to go to the court in the city where the body was found," says Chiarelli. But in Haidar's case, he doesn’t know where his family's bodies were taken, or whether they were recovered at all.


"It's all so confusing. There is no system or procedure in place," says Haidar, his voice rising. His goal is simple: he needs to find his family. But for Chiarelli, this piece of information added another layer of complexity to her already impossible job.

"It was the first time I realized that the morgues in Turkey aren't even connected to each other or that there was no central database," she says. She knew there was only one way — they needed to travel to every morgue in every coastal city that an unidentified body could be taken to.

This trip was unlike any either of them had ever taken, but Haidar was desperate and Chiarelli wanted to help in any way she could. She was struck by Haidar's soft demeanour, kindness and quiet determination. On the first night of their two-week trip, she knew she made the right decision. They arrived late to find only one room remaining in a crummy hotel at the edge of the tiny town of Ayvajik, 300 kilometres from Izmir. Despite Chiarelli's insistence that Haidar and his son should take the only two beds crammed in the room, the pair slept on the floor outside the door.

"That was when everything changed for me and I realized everything would become really special," she says.


If there was a robbery and you got a fingerprint, you would run it against all the police records. Why can’t you do the same with DNA?


They spent the next 13 days stopping at morgues, police stations, hospitals and cemeteries along the coast of Turkey, including Izmir. In every city, morgue, and courtroom, they got the same response. If Haidar was able to recognize a body, then he could obtain a court order, allowing him to submit DNA. Only then would the morgue be permitted to test the sample against the remains.

The logic of the process made no sense to Chiarelli. "If there was a robbery and you got a fingerprint, you would run it against all the police records. Why can't you do the same with DNA?" she says. Every day, Haidar looked through photos and watched videos of bodies being pulled from the water, hoping to catch a glimpse of his son's big ears, his daughter's scrawny, long legs, or his wife's thick black hair. But he never did.


"It was really, really hard to keep going but there was no other way," he says. One thing he did get out of the trip was a friend. Any time he needs something, he now calls Chiarelli to discuss it.

"She is my closest friend," he says. The trip was one of the hardest things Chiarelli had ever done, but hearing how Haidar talked about his family and how much he missed them pushed her to continue.

"I think as much as I was trying to give them strength to keep going, they were also giving it to me," she says about the father and son. After the trip, they met every week to discuss next steps, but now they've hit a wall with the DNA issue, says Chiarelli.


If you don’t find a body, there is always a possibility that they are alive somewhere.

The lack of any answers fuels Haidar's belief that his family might still be alive somewhere, possibly in a refugee detention camp where they can’t contact him. He pursues this theory, visiting detention centres and refugees camps in the country, even getting relatives to check camps in Greece. He is unable to accept that his family is gone. After all, he's never seen proof.

This is not the first time Chiarelli has encountered such hope. "If you don’t find a body, there is always a possibility that they are alive somewhere," she says. "The hope never ends."

United Rescues has 300 active cases, all families who have no idea where their loved ones are. Chiarelli suspects that these are only a fraction of the total number of missing people. Hers is a small NGO, run with just five people and limited resources. But her biggest obstacle is the DNA system, she says. She guesses that at least 100 of her cases could be solved through DNA matching, providing families with much needed closure. But she says Haidar is lucky, in at least one respect.

"He has the opportunity to travel across the country. There are many families who are in Europe or their home countries," she says. "For them, it is impossible."

This story is a part of STUCK, a series co-produced by the UBC Graduate School of Journalism and HuffPost Canada. A team of International Reporting Program fellows spent eight months researching and reporting on the asylum seekers and migrants from the Middle East, Africa and Central Asia who travel through Turkey. We follow their journeys through Turkey’s two-tiered immigration process, and reveal the complex system faced by non-Syrians as they try to start new lives in Europe.